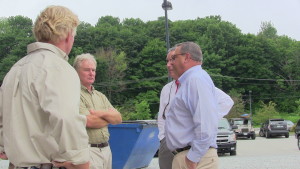 On Friday, August 10, 2012, Governor Paul LePage will travel to Belfast to visit employees and tour the facilities of Front Street Shipyard, a premiere yacht yard that services boats as large as 160 feet. After opening in 2011, Front Street Shipyard has grown to be one of the largest and most capable yacht yards in the Northeast. The Governor will begin with a tour of the facilities at 9:00 a.m.  This will be followed by a reception where the Governor will have the opportunity to meet the shipyard’s employees.

“Front Street Shipyard has created quality jobs for Mainers and I’m glad to see it succeed in one of our coastal communities.  Known for its quality craftsmanship, ingenuity, and perseverance the Shipyard is a perfect fit for Belfast,” said Governor LePage.  “My administration will continue to work tirelessly to create an environment where businesses like this one can grow, flourish, and create good jobs for Mainers.”

Front Street Shipyard occupies the former Stinson Seafood site, which had been unoccupied for a decade. To date, Front Street shipyard has invested approximately $10 million into redevelopment efforts of the Old Stinson Property, resulting in a wave of revitalization to Belfast’s downtown.  To further increase these revitalization efforts, Front Street Shipyard has made available transient dockage to encourage more business and tourists to the Downtown Belfast area.

“My partners and I began Front Street Shipyard with a vision of making Belfast a premier destination for yacht owners, captains and designers worldwide,” says JB Turner, president of Front Street Shipyard. “Our latest expansion and our workforce growth ensure we have the capacity and talent to build, refit and service some of the world’s most impressive yachts.”